On Jan. 24, 1956, a major publication, Look magazine published an article in which two white men from Mississippi, confessed to brutally murdering 14-year-old Emmett Till, a Black teen from Chicago who was visiting family in Mississippi. 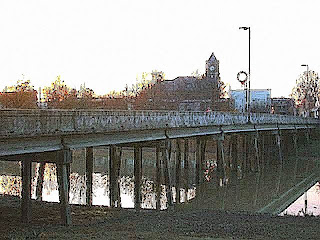 From the Land of Emmett Till: Courthouse across the Cassidy bayou in Sumner, Mississippi (where the trial of J.W. Milam and Roy Bryant took place in September of 1955 for the murder of Emmett Till). Young Till was visiting relatives in Money, Miss. when he was murdered outside of the cotton town of Drew for allegedly whistling at a white woman. After Milam and Bryant were found innocent, Rosa Parks took her stance in Alabama, by refusing to sit at the back of a city bus. Later, she said she was deeply affected by the 14-year-old’s murder. Historians now say that Till’s murder was the spark that ignited Parks and the modern civil rights movement. (Photo by Susan Klopfer)
The year before, on August 1955, Till allegedly whistled at a white woman, the wife of a gas station and small market owner, while he was buying candy inside, prompting J.W. Milam and Roy Bryant ‘s brutal attack several days later, in early morning hours.
In the magazine article, the men revealed how the kidnapped Till, beat him, shot him and threw his body in the Tallahatchie River, using a heavy cotton-gin fan attached with barbed wire to his neck to weigh him down. Earlier in September 1955, the two men had been acquitted by an all-white jury, all-male jury after a five day trial. But much of the details presented by the two men in Look were later questioned by various reporters and researchers.
More on the Emmett Till Story … (details by the author of Who Killed Emmett Till?)