A friend, David Hall, who follows this blog sent the following photo and description. Thanks! 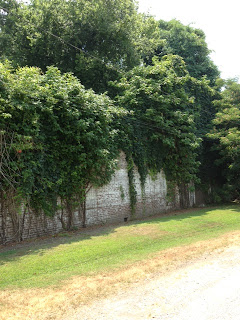 Kathryn and I drove north from New Orleans on a hot and muggy morning to Greenwood, MS and stopped there to ask for directions to Money, MS. I was somewhat unfamiliar with the details of the murder but Kathryn read me some details which refreshed my memory of the event.
We stopped at the courthouse in Greenwood and picked up a newspaper for a friend of Kathryn’s, the author Jordana Shakoor, who was born there and asked a young guard on duty how to get there and he directed us to a street on the northside of town. Within a few minutes we approached the Bryant Grocery in Money and stopped to take a few pictures. It was abandoned and desheveled and looked as if it would crumble apart in a windstorm.  It was covered with ivy and surrounded by weeds with only a landmark sign out front to alert travellers to its claim to fame.
I felt somewhat uncomfortable driving an out-of-state vehicle, especially one from a Yankee state like Ohio, to these parts of the country. A few local yokels slowed to stare at us as they passed and afterwards, as we departed, I thought we were being followed by someone but that could have been my frightened imagination.
When we passed over the Tallahatchie River I thought of Emmett Till once more and felt our journey to Money was worth the risk afterall. The road to the main highway winding north to Memphis was a dirt road and it felt eerie to be driving on such an out-of-way backroad in such a dangerous region based on its horrific history. But within a half-hour we were free from the dangers of Leflore County and on our northward exit way to Memphis.

Sent from my iPhone

Looks like this site is almost gone. Very sad. sk