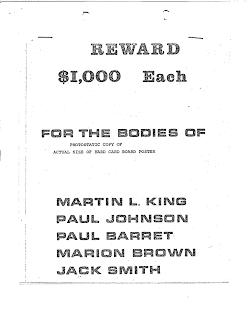 Mississippi was one of the most potentially deadly spots for Dr. Martin Luther King Jr. to appear during the civil rights years, yet he often did so – and not without tremendous personal risk.

Tougaloo College sociology professor, Hunter Bear, (Hunter Gray/Dr. John R Salter, Jr.) left his teaching job, was accused of being a Communist, and almost his life in the mid 1960s for his civil rights activities; he confirms the pressure put on King whenver he came into Mississippi.

Hunter Bear remembers telephoning King and asking him to come to Jackson in June of 1963 shortly after Medgar Evers was killed in front of his home. The state’s well-known NAACP leader’s wife and children were waiting for him to leave his car and come inside the house, after a late night planning meeting at his church.

Charges of Communism in Laurel

Investigating King Meetings in the Delta
————–

“The rapidly growing protest demonstrations were being bloodily suppressed and I asked him to come to Jackson for Medgar’s funeral on June 15. He readily agreed to do so. We picked him up and several key staff of his – Ralph Abernathy, Wyatt Walker and others – at the police-drenched Jackson airport.

“It was already very hot and the temperature was to go, that day, to 102 super-humid degrees. Martin King and Dr Abernathy rode in my car – along with Bill Kunstler – and the others were brought by Ed King (a Mississippi civil rights activist and Tougaloo chaplain, not related to Martin Luther King).

The retired sociologist remembers King’s calmness in the face of “..a very grudging police escort from the city’s all-White police department. The Jackson setting could not have been more lethally dangerous for all of us – but Dr. King visited easily and casually with me, and I with him, as we traveled the very dangerous several miles to the Negro Masonic Temple on Lynch Street.”
————
Salter”s”, Evers and Threats

Evers’ funeral was huge – “several thousand people, inside and out” – and afterwards, “…six thousand of us marched the two miles or so from the Temple to the Collins Funeral Home on Farish Street. It was the first “legal” civil rights demonstration in Mississippi’s hate-filled, sanguinary history.”

King came into Mississippi early on and was there during some of the state’s most critical times. In 1966, a state chapter of the Deacons of Defense, a black group concerned with protection of the lives of African Americans, worried for King’s safety and provided him with armed security during events in Jackson and McComb, and for the James Meredith March held that summer.

It was a good call by the Deacons, since Meredith was shot June 6 near Hernando, a day before the primary election, while walking from Memphis to Jackson to encourage black people to register and vote.

Meredith, four years earlier the first black student to enroll and attend the University of Mississippi, undertook his 220-mile March Against Fear to challenge white supremacy and inspire black Mississippians to vote. This was an unusual move for Meredith, who was home from his first year at Columbia University’s law school; he rarely involved himself publicly in civil rights demonstrations.

After Meredith was wounded, and taken to a Memphis hospital, King and other civil rights leaders continued the protest. The march moved on southward through the Delta to Belzoni, where Rev. George Lee had been violently killed by a shotgun blast to his face eleven years earlier, and on through several other small cotton towns.

Then King split off and left for Philadelphia to hold a service on the anniversary of the murders of James Chaney, Andrew Goodman, and Michael Schwerner; King and others were attacked with clubs while police and Justice Department observers and FBI agents looked on, reported civil rights marchers who were also beaten.
———–
Chaney, Goodman and Schwerner

Meanwhile in Canton, a small town north of Jackson, officials refused to allow marchers to pitch tents on the town’s black school ground. The crowd numbered about 3,500 people and was faced off by sixty-one state troopers lined up in full battle gear, carrying a mass of weapons. The troopers fired tear gas into the crowd and then waded in with guns and nightsticks.

One journalist on the scene observed, “They came stomping in behind the gas, gun-butting and kicking the men, women, and children.”

“This is the very state patrol that President Johnson said today would protect us. Anyone who will use gas bombs on women and children can’t and won’t protect anybody,” Rev. King told reporters.

The riot in Canton would equal in violence and bloodshed the assault on Selma, Alabama marchers one year earlier. After Selma President Lyndon Johnson had federalized the National Guard to protect the demonstrators marching to Montgomery, but his administration’s response to Canton was different. Attorney General Nicholas Katzenbach explained to reporters he “regretted” the use of tear gas against the marchers, for “it always makes the situation more difficult.”

But Katzenbach refused to condemn the police action and asserted the whole matter was under investigation.

Meredith’s March ended quietly as Dr. King rejoined marchers and led a group to Tougaloo College, where 9,000 supporters attended a mass rally. On Sunday, June 26, the march came to close at the capital grounds in Jackson as nearly 15,000 people drew together to hear the civil rights leader declare the march and rally to go down in history “as the greatest demonstration for freedom ever held in the state of Mississippi.”

Just four days after the Meredith incident, Klansmen had tried to lure King back into Mississippi by kidnapping and murdering a black farmer. Members of an Adams County White Knights cell known as the Cottonmouth Moccasin gang murdered Ben Chester White, described by Mississippi journalist Jerry Mitchell as “a quiet man with a shiny gold tooth, a humble man who could hardly read but could still quote long passages from the Bible.”

White was neither a civil rights worker nor was he registered to vote.

Believing they could lure Rev. King to Natchez, the cell members on June 10 shot White who had worked most of his life as a caretaker on a Natchez plantation and had no involvement in civil rights work. (FBI agents arrested Ernest Fuller, Ernest Avants and James Jones four days later. FBI documents indicated that O’Dell Adams, the Adams Sheriff who led the local investigation of the White murder, was also a Klansmen.)

Mississippi could not let go of its hate and harassment of the civil rights leader. And its unique State Sovereignty Commission, opened in 1956 in reaction to federal enforcement of the US Supreme Court ruling on integrating schools, Brown v. Board of Education (1954) and the murder of Emmett Till (1955), often used former FBI agents to spy on and harass Dr. King.

After the Sovereignty Commission was shut down, state lawmakers ordered the files sealed until 2027 (50 years later). In 1989, a federal judge ordered the records opened, with some exceptions for still-living people but legal challenges delayed the records’ availability to the public until March 1998.

Still more records were released in 2002. It would turn out that over twenty years the agency amassed files on 87,000 people making it the largest state-level spying effort in the nation’s history, though some other states had lesser efforts of the same sort.

Hundreds of files on King alone confirm the state’s dedication to spying on and harassing him. Perhaps the most damaging Sovereignty Commission files will never see the light of day; records that were either destroyed, hidden, moved to other state offices or simply never released. But here is one small example of Sovereignty Commission confirming the early-on targeting of King:

Back on September 18, 1959, former FBI agent Zack J. Van Landingham, a Sovereignty Commission investigator, officially reported that A. J. Simmons, a white Citizens Councils administrator, had contacted him about an upcoming Southern Christian Ministers Conference of Mississippi that included Dr. Martin Luther King, Jr. along with other speakers from around the country.

Simmons wanted “these speakers coming here from out of the state … harassed as much as possible” and specifically wanted Dr. King “arrested by the police, taken down, fingerprinted and photographed … [and] had already conferred with Chief of Detectives Pierce about such procedures.”

Van Landingham reported he spoke with Sam Ivy, director of the Bureau of Identification and that “Arrangements were made whereby we could use the recording instrument of the Mississippi Highway Patrol…. I will take some steps to see what pressure can be brought to bear on any of [the speakers] and possibly get the meeting cancelled.”

Mississippi government was not alone in their targeting of King who also was a major focus of the FBI’s COINTELPRO secret operation that also targeted the Mississippi Freedom Democrats, a group led by activists Fannie Lou Hamer and Aaron Henry that ultimately questioned the seating of Mississippi’s all-white delegation to the Democratic National Convention in 1964.

Ironically, most of the Sovereignty Commission’s agents had ties to the FBI as well as other intelligence agencies, and as records show, maintained those relationships when going to work for Mississippi. Clearly they were in good position to help out the federal government in its continued, vicious attack on Rev. Martin Luther King.

Emily Kunstler and Sarah Kunstler have recently completed a documentary about their father entitled William Kunstler: Disturbing the Universe which will have its world premiere screening as part of the Documentary Competition of the upcoming 2009 Sundance Film Festival in January.

The Sovereignty Commission had great interest in Kunstler, who fought for civil righs with Dr. King., hundreds of files are still available to peruse. Here are several: