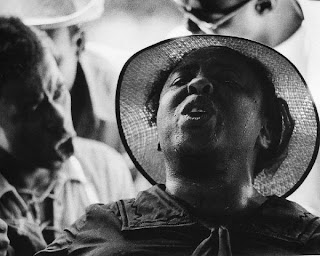 Fannie Lou Hamer of Ruleville, Mississippi — known for her gospel singing and bravery during the modern civil rights movement. (This photo may be subject to copyright.)

…Maybe it’s because from the days of [enslavement] up to and beyond the 1944 rape of RecyTaylor, black women and their families had resigned themselves to the fact that, as Mississippi civil rights activist Fannie Lou Hamer once said: “A black woman’s body was never hers alone.” An all-white jury declined to indict the men for rape, and although a later investigation did garner some confessions, still no action was taken.

This story, and the stories of other black women fighting to reclaim their bodies, are painstakingly documented in Danielle McGuire’s 2010 book At The Dark End Of The Street.

The gang rape of Recy Taylor stands out perhaps because an Army private alledgedly was the ring leader, Abbeville’s law enforcement leaders covered up the crime, and then-Alabama Gov. Chauncey Sparks actually investigated it — fearing that the Abbeville rape might become as notorious as the Scottsboro Boys trial, where nine black boys were falsely accused of raping two white girls in Alabama in 1931.

Because of McGuire’s book, Taylor’s story got a tremendous amount of news media coverage earlier this year, prompting apologies from Abbeville’s current mayor and the Alabama Senate and House of Representatives for the coverup of the crime.

My eyes seemed to race quickly to the mention of Fannie Lou Hamer in Person’s review of this new book. Like many others of my age, race and educational background, I had never learned of Mrs. Hamer in high school or college history courses. It took a move to the Mississippi Delta, near the home of Ruleville (Hamer’s hometown) to learn about this phenomenal civil rights advocate and human being.

How can we respect a woman such as Hamer when we are not even taught about her in our history books? Hence the critical nature of McGuire’s new book, At the Dark Edge.

As I learned more and more about this great woman, I wrote extensively about her part in the modern civil rights movement in Where Rebels Roost, Mississippi Civil Rights Revisited

. Hamer created a national sensation at the 1964 Democratic national convention in Atlantic City by relating the horrific details of her cruel encounter with Winona law enforcement. Lyndon Johnson scheduled an impromptu press conference at the time Hamer was scheduled to speak because he didn’t want “that illiterate woman” antagonizing southern Democrats. But Hamer’s revelations were so appalling and her delivery so intense that all three major networks carried her remarks in their entirety on the evening news.

Yet there is so much more to know about this courageous African American woman.

Born October 6, 1917, in Montgomery County, Mississippi, Fannie Lou Hamer was the granddaughter of a slave and the youngest of 20 children. This wise civil rights leader, singer and storyteller, grew up North of Greenville in Sunflower County, in the middle of the Delta, and often told how her family stayed alive during the hardest years.

In winter months Hamer and her siblings followed their mother from plantation to plantation asking landowners for leftover cotton, the “scrappin’ cotton.

When the family gathered enough cotton for a bale, these bits of scrap were sold to buy food. On those treks “[Mother] always tied our feet up with rags because the ground would be froze real hard,” Hamer wrote in her short autobiography.

Music was tied to survival during these treks and years later Hamer became well known for comforting others with soul-filled gospel singing – especially during some of the most difficult times in the Movement when protesters were beaten and jailed.

As young civil rights workers moved into Sunflower County many quickly discovered that Hamer had a “unique ability to define the problems that affected African Americans in the Delta in their own vernacular.”

In the early 1960s, as the modern civil rights movement progressed, there were predictions of wholesale starvation in the Delta as government commodities were being witheld from sharecroppers during winter or non-working months. Mothers about to give birth were particularly concerned about the consequences.

It was Hamer who pointed out the labor and sweat of blacks that had “made them white folks creamy rich,” concluding, “There’s so much hate. Only God has kept the Negro sane.”

On June 11, 1963, a message came into the Greenwood Student Nonviolent Coordinating Committee (SNCC) office that a group of eight freedom workers –Hamer, along with June Johnson, Annelle Ponder, Euvester Simpson, Rosemary Freeman, Lawrence Guyot, James Wes, and Ruth Day – had been arrested and beaten by Winona jailers in Montgomery County for integrating the white waiting room of the bus station in Winona upon returning from a training session in South Carolina on June 9, 1963.

SNCC leader Bob Moses led a group of volunteers that night to Winona. Though she could hardly talk, Annelle Ponder whispered, “Freedom,” when she saw her friends, wrote Cat Holland who observed that June Johnson’s face was “so smashed and bloody I didn’t recognize her.”

Then Holland recognized Hamer, who … “took her hand and ran it over her lumpy, bruised flesh,” while telling her what happened. Holland recalled her conversation with a police officer:

“Why y’all beat ‘em like this?” I asked the policeman, who stood by leering.”
“We kin give you some of the same thing,” he said.

“Don’t say nothing, Ida,” Miss Hamer said. “You go back an’ tell the others.”

While the regular Democrats were sending a “hand-picked delegation to Chicago with only two token Negro delegates, although Negroes constituted 40 percent of 240,000 of the registered voters in Mississippi,” MFDP members decided they, alone, should represent the state at the upcoming party convention, and Hamer was part of this group.

Aaron Henry, a Delta leader from Clarksdale and friend of Hamer’s, appealed for $30,000 to support the Loyal Democrats of Mississippi, a bi-racial coalition made up of the MFDP, NAACP of Mississippi, the state Teacher’s Association, the Mississippi AFL-CIO and the Young Democrats.

The coalition’s purpose would be to appear before the Credential Committee of the Democratic National convention on August 26 to prove discrimination by the regular Democratic Party of Mississippi.

The secretary of state, however, refused permission to register MFDP because “there was already a Democratic political party in the state,” even though Mississippi Democrats failed to support the national party’s presidential candidate in the previous 1960 elections.

The MFDP was not taken very seriously by whites and it was sometimes the target of editorial “humor.” The state’s spy agency, the Sovereignty Commission, meanwhile, had collected nearly 1000 files on the political organization including newsletters, membership lists, meeting announcements and notes, as well as commentaries from the Commission’s investigators.

Then on August 12, an injunction was issued ordering all MFDP officials not to leave the state and go to Atlantic City for the convention. Also prohibited was engagement by the leader in any further MFDP activity. MFDP filed suit in federal court asking that more than a dozen of Mississippi’s segregation laws be invalidated, taking advantage of the new Civil Rights Act legislation and causing a cloud of last-minute confusion as the group made haste for New Jersey.

Once they arrived, national Democratic Party leaders fell through in support of this unique group from Mississippi and were not prepared to greet MFDP’s 64 delegates with open arms.

President Lyndon Johnson didn’t want bitter debates initiated, even if the regular Mississippi Democrats were supporting Goldwater instead of him.

Johnson and party liberals had campaigned on the basis of their civil rights “successes” and even though the Southern state party structures completely excluded African Americans, Democrats did not want this practice disrupted, fearing they would lose the support of Southern states.

But Fannie Lou Hamer added heat to the convention when she spoke before the Credentials Committee of the Democratic National Convention, telling the horrifying story of her attempts to register to vote in Sunflower County, including the beating she received in Winona.

Lyndon Johnson, concerned over the attention paid to MFDP and the fight for credentials, gave notice that he wanted to deliver a special televised speech on an unrelated topic, as Hamer was speaking.

But news networks recognized the public’s interest in Hamer and played her entire speech on the evening news, giving even more air time than she would have received:

And Hamer’s unforgettable August 22, 1964 testimony would go down in civil rights history.

Earlier in 1962, Mrs. Hamer decided she had had enough of sharecropping. Leaving her house in Ruleville, MS she and 17 others took a bus to the courthouse in Indianola, the county seat, to register to vote. On their return home, police stopped their bus. They were told that their bus was the wrong color. Fannie Lou and the others were arrested and jailed.

After being released from jail, the plantation owner paid the Hamers a visit and told Fannie Lou that if she insisted on voting, she would have to get off his land – even though she had been there for eighteen years. She left the plantation that same day. Ten days later, night riders fired 16 bullets into the home of the family with whom she had gone to stay.

There are so many stories told about this remarkable woman. Editors of Psychology Today could certainly take notes on the dignity and beauty of this lady. (I sincerely invite the editor who chose to publish the recent story about how “research” concluded that black women are not beautiful to read my new eBook, Cash In On Diversity.)

Fannie Lou Hamer died March 14, 1977 of complications of diabetes and the injuries she received in the Winona beating. “She was never the same after that experience,” said an old friend, Margaret Block. Hamer ‘was known for her gospel singing that gave courage to civil rights advocates when they were under seige. She was also known for the phrase… “I’m sick and tired of being sick and tired.”