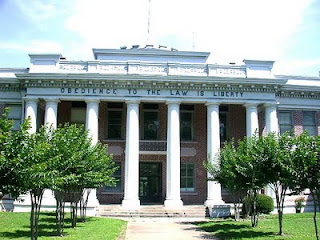 Quitman county courthouse in Mississippi — read the slogan and “Believe It Or Not.”

I’ve been finishing the new book based on this blog, Who Killed Emmett Till? It’s been a fascinating journey and one that has helped me remember some of the specific stories about our time spent in Mississippi.

When writing about the recent events in Tallahatchie County — the local prosecutor being accused of chasing a black man in a homemade tank while waving a gun — made me stop and realize that a story like this is almost too hard to believe for most folks to digest.

If you really cannot imagine that such an incident would take place in Tallahatchie County, I would like to share a quick story about the small town of Sumner, one of this county’s two seats. Sumner was host to the trial of J.W. Milam and Roy Bryant, the men who murdered Emmett Till.

One day I took my son, Barry, who was visiting us after graduating from law school and waiting to take the bar exam, for a drive around the Delta. We drove over to Sumner where he could see the town’s famous courthouse. It was quiet on the courthouse square, quite eery.

Across the street was a small drugstore with a fountain that serves ice cream cones and that sounded good on a hot day.

When we walked up to the fountain, Barry noticed a “no mixing” sign taped to the cash register. Mixing is an old southern term that refers to the mixing of races and is still used today by white supremacists. You can see the term used on websites like stormfront.org. Here’s an example of a recent post:

“Races were not meant to be mixed and that is why God made us different. That is why God put them in Africa and Whites in Europe far from each other because we were never supposed to mix.”

So, it was interesting to see Barry do a double-take when he saw the no mixing sign on the register. After a couple of seconds, he quietly asked the store clerk what the sign meant and got this response: “Oh, we just don’t want people to mix ice cream flavors. You can have all chocolate or all white.”

As I stood back and watched my son’s stunned expression, I knew this was the day he fully understood why he had worked so hard to complete his legal education.