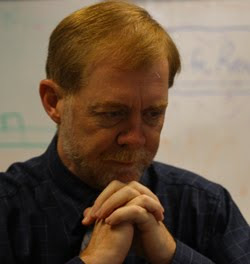 Reporter Jerry Mitchell pauses while talking to students.(Photo from sjsuinauguration.blog at WordPress.)

Jerry Mitchell, an investigative reporter at The Clarion-Ledger newspaper in Jackson, Miss., who focuses on cold-case murders from the civil rights era says he will use money received from the MacArthur Genius award to help write a book on the subject.

Mitchell is among the 24 recipients of the $500,000 “genius awards,” to be announced on Tuesday by the John D. and Catherine T. MacArthur Foundation…

What an exciting announcement made today. I have never met Jerry in person but we’ve shared email and have spoken on the telephone when I’ve had a question, and it is so inspiring to know him in just that small way.

Read about this announcement on Ben Greenberg’s Hungry Blues.

Congratulations to one of the finest journalists in the world!!