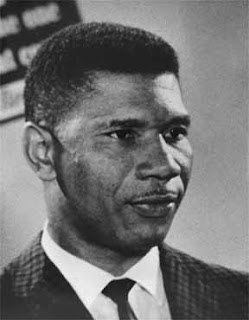 Blogger Rev. Gerald Britt pays hommage to Medgar Evers, Mississippi’s first NAACP leader who was murdered in the driveway of his home:

This year is the 80th anniversary of the birth of Medgar Evers, one of our country’s most significant Civil Rights freedom fighters.

Recognition of Evers often gets lost between that given Martin Luther King, Jr. and Malcom X, yet for 10 years, ending with his assassination in 1963, Medgar Evers was a prominent figure in the struggle for equal rights, serving as field secretary for the NAACP (National Association for the Advancement of Colored Peoples) in Jackson, Mississippi.

Rev. Britt is the Vice President of Public Policy & Community Program Development of Central Dallas Ministries. He is also the author of a monthly column for The Dallas Morning News.

At his site, Britt shows two important film clips…”The excerpt from the documentary ‘Eyes on the Prize’, gives the context of the movement – the institutionalization of the culture of injustice, the intimidation of those who sought to register to vote (briefly shown is an example of the ‘literacy test’ given to actually disqualify voters. The same type of test recommended by Tom Tancredo at the recent TEA Party Convention). It also shows how the legal system gave cover to those who committed such heinous crimes, such as the assassination of Evers.”

The second clip is of Myrlie Evers-Williams at the Martin Luther King dinner.

Of course the Mississippi Sovereignty Commission digital database was filled with files on Evers. Here are just a few to get your started:

Report on NAAACP efforts in Laurel
* * *