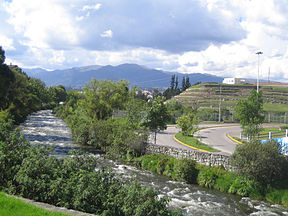 XAVIER, WHO MANAGES the Otorongo Apartmentos, is also a fearless bike racer and he drove along this winding road with ease through the narrow parts of the highest pass reaching 4,450 meters or 14,600 feet. Cajas provides about 60 percent of the drinking water for the Cuenca area, and two of the four rivers of Cuenca originate from Cajas, the Tomebamba and Yanuncay rivers.
This late night in the mountains as we passed through each small village, people were having wonderful times, roasting whole pigs on grills, eating and visiting each other as their children played. We stopped for some fresh fruit from stands holding the must wonderful-looking fruits I had ever seen, and many kinds of fruit I had never seen in my life. Tiny bananas, pineapples and so much more caught our eyes and tasted so good.
As we left the warm air of Guayaquil and drove into the cool mist, the view coming over the Cajas was amazing, with stars brilliantly shining, perhaps as welcoming omens to our new home and retirement venture. “Maybe we will see the Southern Cross,” Fred hoped out loud, referring to Crux, a well-known constellation easily visible from the southern hemisphere at practically any time of year. We looked around and probably did see it – but wouldn’t have known if we had. This was all so new!
Next – Fixing our banged up knees and coming to grips with diabetes