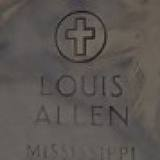 Heading the list of civil rights-era cases remaining officially open by the U.S. Dept. of Justice is the murder of Mississippian Louis Allen, who was killed on Jan. 31, 1964.

Under its “Cold Case Initiative” and the Emmett Till Unsolved Civil Rights Crime Act, the Justice Department has selected such deaths that occurred during the civil rights era to review for possible prosecution.

For most of the 124 deaths re-examined, investigators issued findings that no further action could be taken, but has also listed some 39 cases to remain officially open, including the Allen murder.

Family members of Allen, a Liberty resident shot to death 43 years ago in have offered $20,000 for information leading to the arrest of his killers.

Allen’s namesake grandson, Louis Allen Jr., said family members suspect the killer is alive and that other people were involved.

The Allen case has been one of more than 100 civil rights-era slaying under investigation by the Department of Justice. Louis Allen Jr. said he hopes the reward offered by the Mississippi Religious Leadership Conference will spark more interest in finding justice for his grandfather.

Efforts to solve the case gained steam, following prosecutions in other civil rights-era cold cases, including two life sentences handed down this summer to James Ford Seale of Roxie in the May 2, 1964, kidnapping of Henry Hezekiah Dee and Charles Eddie Moore. The teens were beaten and drowned.

(The Allen family has reportedly not been pleased with the FBI’s lack of progress on the case, a family spokesman once told me.)

Some related Sovereignty Commission files on Allen can be viewed on my separate blog (Click Here).

But for now,  it is a shame that Justice has not taken time to examine the murders of Birdia Keglar and Adlena Hamlett. I will be discussing their murders and the murders of the 39 people listed in this newest report over the next few weeks.