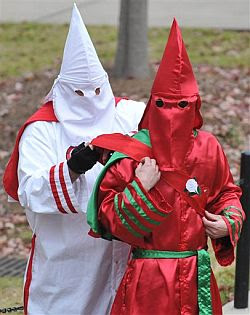 Members of the Ku Klux Klan dress in full robes for a protest on the steps of Fulton Chapel at the University of Mississippi in Oxford, Miss., Saturday, Nov. 21, 2009.(AP Photo/The Clarion-Ledger, Ryan Moore)

The song From Dixie with Love has its roots in the civil war and has been used as the Ole Miss fight song for many years. At the end of the song, however, many chanters openly shout, “The South will Rise Again.”

The chant has been deemed racist and offensive by the many African American students who attend the University of Mississippi. In fact, the chant has become so troublesome, that University of Mississippi Chancellor, Dan Jones had ordered students to stop chanting. After they continued chanting, he ordered the song From Dixie with Love to cease being played. The Ku Klux Klan came out to rally in lieu of the chant “The South Will Rise Again.”