“People who lived through those days will tell you that something shifted in their hearts after Medgar Evers died, something that put them beyond fear…. At that point a new motto was born: After Medgar, no more fear.” Maryanne Voller, Esquire 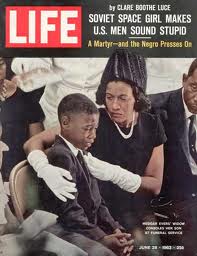 THERE MAY BE SOME WHO still ask ‘who was Medgar Evers and what role did he play in the modern civil rights movement?’


Not a surprising question really, since most U.S. history books do little in telling so many of the stories of this country’s critical  civil rights movements, including much about this Mississippi solider who came home from WWII and gave his life on American soil, so that he and others could enjoy the freedoms fought for by Americans, overseas.


It was on June 12, 1963 that Evers was shot and killed in the late evening outside of his Jackson home; he was buried in Section 36 of Arlington National Cemetery one week later and his story is portrayed in the motion picture, “The Ghosts of Mississippi.”
*****
FOLLOW THIS BLOG
*****

Medgar Evers was born July 2, 1925, in the small central Mississippi town of Decatur where the current population is less than 1,500. After serving with his brother, Charles, in WWII, Evers came home to finish high school and college. After working in the field of insurance, in 1954 he became the first state field secretary of the NAACP in Mississippi.
Growing up in a Mississippi farming family, both Evers and his brother Charles enlisted in the United States Army in 1943. Medgar fought in both France and Germany during World War II and the brothers received honorable discharges in 1946.
In 1948, Evers entered Alcorn Agricutural and Mechanical College (now Alcorn State University) in Lorman, Mississippi where during his senior year, he married a fellow student, Myrlie Beasley; they later had three children: Darrell, Reena, and James.
In 1954, the year of the momentous Supreme Court decision Brown v. Board of Education, which purportedly ended segregation of schools, Medgar quit an insurance job to apply for admission to the University of Mississippi Law School (and was denied).
His unsuccessful effort to integrate the state’s oldest public educational institution attracted the attention of the NAACP’s national office and later that year, Evers moved to the state capital of Jackson when named the first state field secretary of the NAACP in Mississippi.
AS STATE FIELD secretary, Evers recruited members throughout Mississippi and organized voter-registration efforts, demonstrations, and economic boycotts of white-owned companies that practiced discrimination. He also worked to investigate crimes perpetrated against blacks, most notably the lynching of Emmett Till, a 14-year-old African-American boy who was killed for whistling at a white woman.
Evers’ activism soon made him the most visible civil rights leader in the state of Mississippi, resulting in numerous threats and violent actions against his family over the years, including a firebombing of their Jackson home in May 1963.
Then at 12:40 a.m. on June 12, 1963, moments after Evers stepped out of the car in the driveway of their home, a sniper hiding in a clump of honeysuckle vines shot him with a high-powered hunting rifle. Mrs. Evers found her mortally wounded husband at the steps by a door to their house, where he had managed to drag himself after the bullet struck him in the back and tore through his chest, before he died.
Byron De La Beckwith (whose Ku Klux Klan friends called him DEE-lay) was quickly linked to the killing after the sniper’s rifle was discovered near the scene bearing his fingerprints. Some witnesses reported seeing a man who looked like Beckwith  in the vicinity, and a car that looked like his white Plymouth Valiant was seen in the neighborhood.
Beckwith, a fertilizer salesman who lived in Greenwood, Miss. [site of The Help], was an ardent segregationist whose hatred for blacks, Jews and Roman Catholics was well known. He told investigators his rifle had been stolen, and two police officers reported seeing him in Greenwood, some 95 miles away, at the time of the killing.
NATIONAL OUTRAGE over Evers’ murder increased support for legislation that would become the Civil Rights Act of 1964. Immediately after Evers’ death, the NAACP appointed his brother Charles to his position. Charles Evers went on to become a major and highly controversial political figure in the state; in 1969, and was elected the mayor of Fayette, Mississippi, becoming the first African-American mayor of a racially mixed Southern town since the Reconstruction.
*****
FOLLOW THIS BLOG
*****
Three Trials, Over the Years
Two trials followed, with Beckwith’s supporters including then-Governor Ross Barnett, who appeared at Beckwith’s first trial to shake hands with the defendant in full view of the jury. In 1964, Beckwith was set free after two all-white juries deadlocked. Finally, he was convicted some thirty years later.
In the early 1970s Beck would spend several years in a Louisiana prison for carrying a bomb in his car that he meant to use on the home of a leader of the Anti-Defamation League of B’nai B’rith. Found guilty in state court of transporting explosives without a permit, he was sentenced to several years in a Louisiana prison. In 1979, he became ill and while in the prison infirmary, was overheard telling guard that he “got rid” of Evers.
The guard testified in 1994 at Mr. Beckwith’s third, and decisive, trial on murder charges and the jury of eight blacks and four white people returned a guilty verdict on Feb. 5, 1994. Another witness from Greenwood, Peggy Morgan, also testified she heard Beckwith claim to kill Evers, appearing as a surprise witness.
There is more to this story that I learned from talking to people living in the Mississippi Delta, who still remembered this American hero. I collected some of their stories for my book, Where Rebels Roost; Mississippi Civil Rights Revisited. Here is a short chapter that focuses on Evers:
In his death, Medgar Evers became a greater hero to those who knew him, and he became a national symbol of the black struggle in whole. Murdered when he was leading a courageous battle against Mississippi’s white supremacy, Evers had to contend with NAACP leader Roy Wilkins, who sometimes acted as if he wanted to lead the Mississippi Movement from his isolated office in New York.
*****
FOLLOW THIS BLOG
*****
There was arrogance that only “they” – Wilkins and others from the national NAACP—knew what was best for Mississippi’s progress. In Jackson, there were others who pulled at Evers, as blacks were divided over questions of tactics and strategy.
Continue Reading This Chapter Here


*****
To arrange for Susan Klopfer to speak to your organization on civil rights or diversity topics, contact her at http://susanklopfer.com