The Story of Henry Crosby, a black man lynched in 1913 in Mississippi 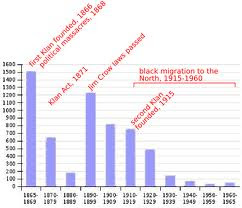 Interesting graph, placing increased lynching in the South into a time frame between founding of the Ku Klux Klan and Northern migration

Here is how a conversation on Facebook ended up today, I swear, with a fascinating discovery of a facebook friend’s family history.

It certainly gave meaning to my otherwise slow Sunday afternoon.

When reading the following posts, understand there was about 15-30 minutes between most of the conversation, so this conversation went on for at least several hours. Here is the first message I just happened to see while scrolling through my Profile page:

Joie Nelum Bonds: Have you read any of your FB messages Ms. Klopfer?

(I don’t typically check my facebook messages, except for occasionally. The message from Joie looked like it had come in about six hours earlier, so I wanted to make sure I quickly responded.)

Susan Klopfer: yes. Just took a look a moment ago. However, I don’t rely on this aspect of facebook, as much as email. Did I miss something?

Joie Nelum Bonds: just wanted to exchange thoughts with you on “The Help”. I did finally go and see it. The times mandated that black people use a certain tone when they challenged a white person (Jim Crow Laws) and to a certain extent I feel that the movie industry still has certain mandates –that in order to “sell your product” to a crossover audience, you have to say it in such a way that it will be accepted. If she had been to assertive and shoved the history down the throat of her viewers, it might have turned them off and the demand would not be as great as it is. So all things considered, I had to respect the film makers choice to do overwhelm the audience with the history. ..as important as it still is..they needed to get the message in perhaps a softer tone. And I think she succeeded at that.

Joie Nelum Bonds: not to overwhelm ..pardon the typo

(So I go off on a tirade – since I don’t have good feeling about Hollywood and its latest whitewashed movie about civil rights. You really don’t have to read it all, suffice to say I disagree with Joie.)

Susan Klopfer: I understand what you are saying, and as far as marketing that is certainly true. The problem is, we already have a host of people who are lying about what happened in these years, i.e. Michelle Bachman, Rand Paul, Sarah Palin, and so many others. When movies coming out like Mississippi Burning (a fabrication, trying to make the FBI look responsible) it harms the people who need to know this history. The citizens of the United States. The violence was horrid in Mississippi and in many other regions.

When I lived there and started learning about all of the murders, I was almost paralyzed — before I went to work and started gathering real history. The pressure to whitewash this is still tremendous. There are white Mississippi journalists and historians who will not speak to me. We just cannot let Hollywood dictate the story of our country and democracy. Tough, if they want to make money and can’t do this unless they lie.

People need to know the real stories of heroism and bravery. The civil rights movement was anything but peaceful and understated. Sorry, but I would rather see truth and more empty seats in the theatre, if this is what it takes.

Susan Klopfer: almost forgot. You had an[other] interesting post about facebook and the Egyptian revolution. A UK journalist, Denis Campbell, has written a fascinating account of this and you can read a sample chapter at http://www.ukprogressive.co.uk/

Joie Nelum Bonds: I respect your passion. And I hope that film makers receive the encouragement that they need to MAKE MORE DOCUMENTARIES covering the true history. I would want the truth told about my life if I were the subject, so I am not going to argue that at all.

Susan Klopfer: Thanks, Joie. When I was working in Mississippi, I started meeting older people who as they began to trust me, started sharing lists of names. It turned out these were lists passed down by their parents and grandparents of people who died mysteriously, were killed or just disappeared.

They all had pledged to keep these lists and someday show them to other people who might be able to find the answers. I combined these names with all the others I could find relating to the slaughter of AFrican Americans, just in that state. Here is a link of over 1,000 names that I put together.

The typical historian states that approximately 500 people were murdered in this time period. I believe a more accurate number would be close to 1,000. Here is a link to my lists of lists … Take a look, and you will see why I am passionate about truth in telling…

Susan Klopfer: Here is a link to my Mississippi’s Lists of the Dead. http://themiddleoftheinternet.com/OnlineBooks/Rebels/ListofDead.pdf

[I leave my computer and the house to go help my son move some furniture. About 90 minutes later,upon return, our facebook conversation continues.]

Joie Nelum Bonds: have to share this with my family, I see a name that might be one of our family members.

Susan Klopfer: how interesting. Please tell me what you know.

Joie Nelum Bonds: My Granddad Mack Crosby accidently shot his biological father, Henry Crosy Sr. when he walked in on him (a tall Irish man) having sex with his mother (a woman from Guyana S. America). He and my great grandmother had 9 boys together, the oldest was Henry Crosby listed on page 15 or so of your list. When my grandfather escaped the south he took his older brother’s name who had been hung for a crime he did not commit. The woman wanted sex from him and he wouldn’t do it, so she claimed that he had abused her and they hung him for it. So– I am thinking that is my grand uncle Henry Crosby who was hung in 1913.. … sure fits the time frame.

Susan Klopfer: What page is his name on? I will see if I can find out any more. Remember those “crimes” were typically made up by the white law enforcement. Touching a white woman’s hand was considered to be rape.

Susan Klopfer: I found Louisville, Miss. using Mapquest. It is an area east of the Yazoo Mississippi Delta, (the Delta ends east of Greenwood) [some] 25 miles North of Philadelphia, where [Michael] Schwerner, [James] Chaney and [Andrew] Goodman were killed in the summer of ’64. That’s a very rural, frightening area.

When I was driving between Meridian and Philadelphia just several years ago, with a group of people in a motorcade, some men in a pickup tried to stop us with baseball bats. It is truly fascinating that you found his name and also that you know this story. Why not do some more research and write about it.

This is the kind of truth that people need to hear about and realize why this movement was so difficult in Mississippi and why there is continued violence. The period of time, around 1913 was horrible, moving into the second phase of the civil rights movement. It is a time when people were getting some help from organized labor and even the Communist party, at least in the region along the Mississippi River. It was a time of many, many lynchings and massacres.

I found Henry’s name on another site you should look at — http://www.autopsis.org/foot/lynchdates2.html (“Henry Crosby lynched Louisville Mississippi September 21 1913”). There is a book that you might want to read that does a good job of describing [a period close to] these times, called American Congo by a professor from the University of Alabama [Nan Woodruff]. You can probably get it used on Amazon. I also write about these times in my book, Where Rebels Roost. Let me know what you learn. What an opportunity to do some real research for an important reason. Take care. You have some work to do.
* * *
I do love it when a good story floats by and I have the opportunity to catch the drift. Meanwhile, here is a fascinating book to read by Dr. Woodruff – It’s a bit price and perhaps you can get a used copy. And it is fascinating.

This is the story of how rural black people struggled against the oppressive sharecropping system of the Arkansas and Mississippi Delta during the first half of the twentieth century. Here, white planters forged a world of terror and poverty for black workers, one that resembled the horrific deprivations of the African Congo under Belgium’s King Leopold II.

Delta planters did not cut off the heads and hands of their African American workers but, aided by local law enforcement, they engaged in peonage, murder, theft, and disfranchisement. As individuals and through collective struggle, in conjunction with national organizations like the NAACP and local groups like the Southern Tenant Farmers’ Union, black men and women fought back, demanding a just return for their crops and laying claim to a democratic vision of citizenship. Their efforts were amplified by the two world wars and the depression, which expanded the mobility and economic opportunities of black people and provoked federal involvement in the region.

Nan Woodruff shows how the freedom fighters of the 1960s would draw on this half-century tradition of protest, thus expanding our standard notions of the civil rights movement and illuminating a neglected but significant slice of the American black experience.