I wrote this short piece a number of years ago. But it’s very durable and the story it tells is forever engraved in the minds of myself and my good spouse, Eldri. There are some very good reasons why I am running it widely at this point.  Among them, we are now into the month of June and quite close indeed to the 50th anniversary of the massive Jackson Movement of 1962-63.  I should add that I still have — and always will — the infamous License Plate. 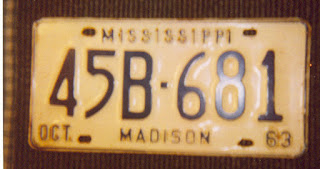 [Editor’s Note: Hunter Gray keeps an updated bio on his site, that begins…  “I was born from the Four Directions — as John Randall Salter, Jr. I grew up in wild and rugged mountains and canyons at and around Flagstaff, [Coconino County] Arizona. It was a quasi-frontier atmosphere where you learned early on  how to fight — and fight effectively. You also learned and appreciated the sensible use of firearms. My father, a full-blooded American Indian originally from the Northeast (Mi’kmaq/St. Francis Abenaki/St. Regis Mohawk), was born Frank Gray but, as a child, was adopted and partially raised by William Mackintire Salter and Mary Gibbens Salter, very prominent New England liberals, who changed his name to John Randall Salter. My mother, an Anglo, was from an old Western “frontier” family.” Read the rest of this sociologist’s and civil rights hero’s biography at http://hunterbear.org/narrative.htm. SK]

“. . .THE DEVIL HIMSELF, COME RIDING DOWN THE DRAW ”
[A MAGNOLIA TALE] HUNTER GRAY
Every now and then, as I did this morning, I catch pieces of the fine Mississippi film, A Time to Kill, based on the John Grisham novel.  I saw it when it initially appeared in 1996, intrigued by the fact that it was filmed on location at Canton, Madison County — a small city just north of Jackson — and one of the worst racist settings of them all in the Bad Old Days.  I have many Canton stories, some as early as ’61.

I am not known for admitting mistakes, but . . . here is a big one that directly involved me and Eldri.

On June 18, 1963, at Jackson, in the heat of our Movement, I was lethally targeted via a most  interesting car wreck. I was seriously injured, almost killed as was a friend, Ed King, riding with me.  My vehicle, a ’61 Rambler, was totaled. Healing fast, I was functionally out of the hospital in a matter of days [my friend was there much longer.]

A few days before the wreck, I had sent Eldri and Baby Maria out of state via airplane to her parents in Minnesota because of constant threats — especially  bomb threats. She had not wanted to go but I forced it.  [There is a very poignant scene in A Time to Kill in which the young liberal lawyer, defending a Black man in Canton, does the very same thing with his wife and child — in relatively contemporary times. Can’t help but wonder if Grisham read my book!]

Anyway, Eldri returned via air as soon as she learned of the wreck and our profound injuries. Maria remained with her grandparents. We had no car. Very soon after I was back at Tougaloo, still obviously quite physically damaged, the car salesman from McKay Motors in Jackson arrived driving a
brand-new Rambler.  He was accompanied by a colleague in another car [to drive him back, obviously], and he came into our on-campus house with a handful of papers. [McKay Motors was one of the few white firms that we all were not boycotting. Medgar Evers, who knew the scene intricately, had indicated they had repeatedly declined to contribute to white Citizens Council causes.]

“I have a car for you,” our salesman said cheerfully.  “And I have all the papers right here for your signature. All worked out with CIT [credit.]”

I didn’t even go out to look at the new car.  I signed and, when I had finished, our man added, “You understand, of course, that, under the circumstances, I can’t give you the CIT life insurance policy that normally goes along with this kind of arrangement.”

“I understand perfectly,” said I — and then pointed to the old Winchester ’73 44/40 that Medgar had loaned me some weeks before.  “That’s my life insurance policy,” I added.

He and his friend nodded in understanding fashion, then left.  [I had other firearms as well — and also a life insurance policy from Phoenix Local 1010 of AFT to which I belonged on an at-large basis. That had been arranged by Bill Karnes, its president and a national AFT vice-president.]
*****

We now had a car which we drove around with its temporary license sticker.But we needed a regular plate. About one half of Tougaloo College and grounds are in Hinds County [Jackson] and the other half — the one in which we lived — is in Madison County [Canton, of course.]  One quiet, hot afternoon, that early July, Eldri and I decided to just drive up to Canton in leisurely fashion and get it.

In an extraordinary omission, we told no one where we were going.  When we got to Canton, we went to the old white courthouse [same one that’s in the film] and I parked adjacent to the nice green lawn.  Leaving Eldri, I went into the building and down, as I recall, to its rather dim lower level. Seeing the sign for license plates, I wandered over. The little lady at the window, dressed in Western style and smoking a cigarette, [could have come out of my home county in Arizona], smiled cordially as I gave her my vehicle papers.  She gave me something to fill out personal info-wise and, as I did, I saw two men behind her — wearing wide brimmed hats — seated at a table, their backs to me.  They were working on papers.]

Completing the form she had given me, I plunked down the cash, turned and walked a very few feet
down the corridor to glance momentarily at a bulletin board, then returned for my plate.

But much had changed in that moment. My little lady was truly ashen-faced, frozen save for badly trembling hands.  The two men had turned around and, mouths open, were staring at me. One was Sheriff Billy Noble, one of the worst racist officials in the state, and the other was his Chief Deputy, Jack Cauthen.

Cauthen, a month earlier, had come with a bevy of heavily armed deputies to Tougaloo to serve me and others with the sweeping anti-Movement injunction issued by the Hinds County Chancery Court:  City of
Jackson vs. John R Salter, Jr et al.  I had gone outside to them, struck by the fact that it was truly an Old West scene or at least something out of Salt of the Earth. Cauthen had smirked as he gave me the sheaf of papers which he obviously saw as Holy Writ and had, pro forma, shaken hands.  The others had looked on coldly.

We defied the injunction, of course.

And now here we were.  I was deep in their bailiwick — if not in their hearts.  There they were.  And sweet Eldri was sitting in the new car outside.

And then, through my mind, came a few lines from the old Arizona cowboy ballad, The Sirey Peaks [a big range in the north central part of the state]: “And who should they see but the Devil Himself come riding down the draw.”

There was an extremely long moment, during which I realized the fool thing I had done to come by ourselves under these circumstances.

But I remained expressionless, didn’t blink an eye nor move. Slit-eyed and stony faced.

And then suddenly the Sheriff and the Chief Deputy abruptly turned their chairs and returned to their paper work.

And the little lady, still shaking, hastily pushed the metal license plate out to me.

“Thank you, Ma’am,” said I in my very best homegrown Northern Arizona twangy drawl.  She did not acknowledge.

I left the courthouse very casually and Eldri and I returned to Tougaloo. Then and only then, did I tell her the events inside the big old white building.

She is not comfortable watching A Time to Kill.

See the Stormy Adoption of an Indian Child [My Father]:
http://hunterbear.org/James%20and%20Salter%20and%20Dad.htm
(Expanded much in May/June 2012 — and also some photos.)

For the new, just out (11/2011) and expanded/updated
edition of my “Organizer’s Book,” JACKSON MISSISSIPPI —
with a new and substantial introduction by me.  We are now at
the 50th Anniversary of the massive Jackson Movement of
1962-63.
http://hunterbear.org/jackson.htm