Who Killed Emmett Till? It is a fair question to ask, as the 56th anniversary of this murder arrives.
* * * * * 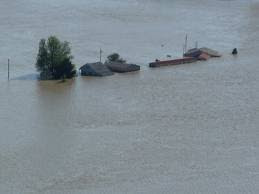 Recent flooding in the Mississippi Delta* * * * *

In 2003, my husband was hired by a private medical group to be the mental health director for inmates in Mississippi’s state-run prisons. And so, our lives took on a new dimension as we made a small, red brick house on the grounds of the once notorious Parchman Penitentiary our new Sunflower County home, in the heart of the Delta.

Eventually, I would enjoying smelling the rich alluvial soil and appreciate where we had been dropped, and I use this word with sincerity, because I really did feel as if I had crash-landed in a foreign country, but an interesting one at least.

But not the afternoon of my arrival. The air conditioning was broken and the house had not been cleaned by maintenance crews, as promised. There were cobwebs in every corner, dirt on the floor and it was at least 100 degrees plus beastly humid in the shade.

Honestly, I was madder than hell when I finally got to Parchman because the car had broken down in Oklahoma, putting our three cats and myself into a dilemma. Fred had been living in Jackson, the state capitol, for a month and could only help problem solve by telephone as we drove in from Nevada. Plus, we were REALLY broke.

Something I would learn following my self-serving fit of anger was that prisoners don’t ever have air conditioning in this old prison that was built at the turn of the 19th century, except in the hospital unit. All of the historic brick and turn of the century buildings were replaced years ago by metal construction and the prisoners were living in what amounted to bake ovens. They were living in hell.

Mississippi State Penitentiary, earlier known as Parchman Farm, is the oldest prison and the only maximum security facility for men in Mississippi. It was built in 1901, houses almost 5,000 inmates, and has its roots deeply seated in the blues. The most notable recording was by Bukka White, with “Parchman Farm.”

However, many famous people have come to stay at the farm, including Elvis’s father and the first known photo of Elvis is of him inside the facility. A dozen or so years later, Freedom Riders were imprisoned at Parchman while the state’s governor and President Kennedy talked about their civil disobedience. They were eventually released and only last month, a number of those brave souls returned to the old prison to celebrate their victory when they were greeted into Mississippi by state officials. Time really does march on, especially in Mississippi, or Miss-sippi, as the locals say.

Summer left and on cooler fall mornings, I watched out the front window of our new home through the leaves of the ancient pecan trees as several prisoners at a time trotted rescue and misfit horses into the ripe cotton fields. They earned this privilege, working with a unique horse-care program, and I wondered how much it would hurt to enjoy and then relinquish such freedom when evening came.

Eventually I would learn that one year before we arrived, Mississippi’s Department of Archives and History, upon court order, made its second release of an online full-text version of the state’s secret Sovereignty Commission records. The commission operated as a private spy agency from 1956 to 1972 within the state government, with a mission to investigate and halt all integration attempts.

The commission’s second goal was to make Mississippi look good to the world, despite the rich history of frequent beatings and murders of its black citizens and outsiders who came into the state, trying to end racial violence and discrimination, and reinstate voting rights.

But even more fascinating to me, was that in the same year we moved to Mississippi, the FBI began re-examining the murder of Emmett Till and would exhume his body the following summer as one of more than 100 unsolved civil rights cold cases that occurred prior to 1969.

Fred came from a liberal, big-city family and could recall hearing his parents talk about 14-year-old Till’s murder when he was a child growing up in Oregon. Raised in a small eastern Oregon town,in a more conservative family, I had never heard this important story. Yet Fred had not realized until the news came out that we were living in the epicenter of the Land of Emmett Till.

The story of this young man from Chicago who was murdered in a small, nearby cotton hamlet began to resurface in the national news when his body was exhumed and examined in June of 2005 by the Cook County medical examiner’s office. While eating catfish and greens in Drew’s Main Street restaurant, we listened in as some Delta people, black and white, talked quietly about what was happening.

Soon, I was spending more and more hours in Walter Scurlock’s cozy restaurant listening and then driving around the Delta, trying to piece together the stories I was gathering from all of the whispers. A few of the older black people warmed to my questions and started sharing their secrets of relatives and others who were brutalized and sometimes killed, over the years.

And as they told their stories, it was as if these horrific crimes had just occured. Most white people eating dinner at Walter’s, on the other hand, didn’t seem to want to share what they knew unless they had been actively involved in the movement. Or they simply didn’t know the history.

Or they or their relatives had been part of the brutality.

Mississippi’s William Faulkner once wrote “The past is never dead, in fact, it’s not even past.” And in true Faulknerian spirit, the people who wanted to talk to me were soon sharing their stories. Some had kept lists of up to thirty names, passed through their families, of people who had “disappeared.”

Others told stories of their own involvement in trying to bring change in a confederate state where so many soldiers had been terribly wounded in the Civil War, and where the white relatives of those Rebels who lost arms and legs, their land and often their lives, could still recite the history of those atrocious times of well over 100 years ago. Mississippi had taken the worst beating of all the Southern states and the wounds have never gone away.

I started looking through yellowed files in small-town libraries, museums and newspaper offices seeking records of any kind to expand my knowledge; some records were so delicate and uncared for, they crumbled in my hands and I had to quickly put them down so they would not be ruined.

Still, the best history came directly from the people who talked to me — men and women wanting to tell me what they experienced or had heard during some of the worst years of Mississippi’s civil rights … and civil wrongs.

Who Killed Emmett Till

? — with their loving help — would eventually fill my computer screen, and so many of my thoughts as well, since we left the Mississippi Delta.