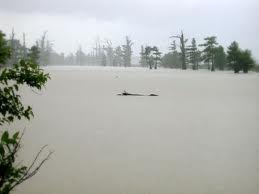 “Whore’s Lake” in the Mississippi Delta, near the spot where Emmett Till was killed back in the summer of 1955, has a history of its own…black women were frequently killed and thrown into this lake by white women of the Ku Klux Klan for the alleged crime of sleeping with their husbands. The lake is just outside of Drew, MS (Sunflower County) near the plantation shed where Till was taken and beaten before he was killed for whistling at a white woman. The story is still important today, and has numerous parallels to the recent and tragic murder of Trayvon Martin in Florida. Many people — from historians to columnists and people who personally relate to Till’s death — are writing about the parallels to the murder of Trayvon Martin. Others, usually ignorant to civil rights history, still question why we should care (about either case). In the words of a famous civil rights advocate who came from The Land of Emmett Till, there are those who are getting “sick and tired of getting sick and tired” of feeling a pressure to justify further examination of either murder. I show this particular picture because it provides needed context to what life was like for black people in Mississippi, back when young Till was lynched. Has life really changed very much for young, black men today? Where is the media? More reporting is needed. (Sometimes, I really wonder. But that is for another day.) SK

Some people still don’t get it — about the murders of Emmett Till and Trayvon Martin, and how they relate to our entire society (not just to African Americans). Yet, these are core stories that must be told, and I find myself telling the story of Emmett Till over and over again, mostly to Northerners. Must admit, I am a Northerner and did not know this story, until I went to Mississippi.


History lessons told to most youngsters must still be skipping the story of Till. At least they did in my history classes. I wonder if the same will happen to the story of Martin, once the murder trial of George Zimmerman ends…


Stephanie Jones, a former Atlanta Public School teacher, is a graduate student in education at the University of Georgia who writes about her introduction to the murder of Emmett Till, back in the summer of 1955 in the Mississippi Delta:

I never learned anything about the Emmett Till case when I was in school. I don’t blame my teacher for not telling me this story. Teachers, under pressure to perform, may have had to push historical moments like these into corners for us to find out about later. That later came one afternoon.

When my mother’s Jet magazines came in the mail, I often flipped through them without much regard, only stopping at the album sales for the week or the announcements of black marriages and anniversaries.  I first saw Emmett Till’s face within the pages of that magazine.

There was no picture of Emmett as he looked as a boy, but rather a mangled and swollen pair of lips and two irregular spaces where the eyes should be.  I quickly turned the page and I never saw the picture again.  The picture became lost somewhere in my memory and I lived uninterrupted from that moment on.

Until I went to Mississippi. (Continue Jones’s remarks here. )

For myself, I think that I have written all that I can about this horrible crime and what it means to our society, even today. And I am sick and tired of being sick and tired of feeling a need to justify why either story (of Emmett or of Trayvon) must be examined. But here is more (an eBook on Emmett Till), if you are still wondering why we must continue to care about the murder of a young Chicago boy who went to visit relatives in the Mississippi Delta — and how it relates to Martin’s demise.
Click Here.

*****
To arrange for Susan Klopfer to speak to your organization on civil rights or diversity topics, contact her at http://susanklopfer.com