“Knowledge makes a man unfit to be a slave.”
― Frederick Douglass 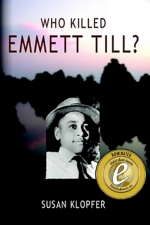 Who Killed Emmett Till, by Susan Klopfer

Emmett Till was just a kid, a black kid from Chicago who had limited ideas about racial politics or an old man called Jim Crow. Till’s mother had given her son some warning before he went to visit his relatives in the small town of Money, based on her own experiences living in the Mississippi delta as a young girl. But her stern talk didn’t sink in. When she learned her son was dead, that he had been brutally murdered for whistling at a white woman, Mrs. Till Mobley and the NAACP decided the whole world should know what happened to Emmett and held an open-casket funeral in Chicago, allowing a photograph of her son’s disfigured face to appear in Jet magazine.
“For over four days, thousands of people saw Emmett’s body. Many more blacks across the country who might not have otherwise heard of the case were shocked by pictures that appeared in Jet magazine. These pictures moved blacks in a way that nothing else had. When the Cleveland Call and Post polled major black radio preachers around the country, it found that five of every six were preaching about Emmett Till, and half of them were demanding that ‘something be done in Mississippi now’,” wrote Juan Williams in his classic Eyes on the Prize: America’s Civil Rights Years, 1954-1965.
Mississippi’s largest newspaper, The Jackson Daily News, termed Emmett’s murder “brutal” and “senseless,” but complained that the NAACP was arousing “hatred and fear” by calling Till’s murder a lynching.
The trial of Till’s murderers was dramatic, with coverage by national and international reporters — a first for such a crime carried out in the United States.
In Belgium, two newspapers published articles on the acquittal. Le Peuple, the daily Belgian Socialist newspaper, called it “a judicial scandal in the United States.” Le Drapeau Rouge headlines announced, “Killing a black person isn’t a crime in the home of the Yankees: The white killers of young Emmett Till are acquitted!”
In France, the daily newspaper Le Monde, ran an article titled, “The Sumner Trial Marks, Perhaps, an Opening of Consciousness.” But on the next day, in Germany, the newspaper Freies Volk published an article with the headline, “The Life of a Negro Isn’t Worth a Whistle.”
As the trial of J.W. Milam and Roy Bryant ended, defense attorney John C. Whitten told the jurors in his closing statement, “Your fathers will turn over in their graves if [Milam and Bryant are found guilty] and I’m sure that every last Anglo-Saxon one of you has the courage to free these men in the face of that … pressure.”
The twelve white jurors returned a not guilty verdict in 67 minutes on September 23rd, the 166th anniversary of the signing of the Bill of Rights. The jury foreman later explained, “the state failed to prove the identity of the body.” Months, later the two men confessed their crime to a national magazine reporter.
Young Emmett Till’s brutalized body and the 1955 Sumner, Mississippi trial showed the world the racial problems belonging to the United States, and gave a new voice for victims of racial injustice.
Among those moved to action was Rosa Parks of Montgomery, Alabama, who at the age of 42, refused to obey a city bus driver’s order that she give up a forward seat to make room for a white passenger. This came twelve weeks after the trial. She was not the first civil rights activist to make this move; there had been other attempts. But Parks had been planning her personal protest. She saw the picture of Emmett in the newspaper and encouraged by the NAACP decided there would never be a better time to take a stand. Thus, Emmett Till’s lynching is said by many of today’s historians to have sparked the moderncivil rights movement.
Does the name Emmett Till still have impact? Does his story ring a bell? I remain amazed at those who have never heard of this young man and the significance of his death. Personally, I have educated an anthropologist (chair of her academic department at a major Catholic university), too many well-paid journalists, high school history teachers, and some of my friends about the story of Emmett Till. All are white and from the North!
Now here we are, fifty-eight years later and still mentioning Emmett Till’s name, seeing his name in print and hearing news commentators bringing it up.
A black teenager in Florida is shot by a man who feels threatened by candy he carries in his hand. He thinks it might be a gun. We read scathing remarks aimed at those who assert the incident itself, as well as the all-white jury’s acquittal of the accused, is reminiscent of Emmett Till.

I believe the comparisons made between the murders of Trayvon Martin and Emmett Till have some validity. Both murders stimulate important civil rights dialogue and neither young man will be forgotten. Regardless, Emmett Till’s lynching, brutal murder, his open casket funeral, the published photos of his corpse, the news coverage around the world, the acquittal of the murderers who later confessed, all served to shock and outrage people around the world. This crime represents one of the most horrific inhumane injustices committed against an innocent young person in this country. It also represents the spark that ignited the modern civil rights movement and an end to the racist Jim Crow laws.

Young Till’s lynching fifty-eight years ago in the Deep South may not resemble the same type of injustice that occurs today, but “lynching and injustice” in the form of hopelessness, lack of education, poverty, poor health, lack of employment, imprisonment of youth and so many other forms of disenfranchisement continue to exist, and must be addressed through education, say directors of the Mamie Till Mobley Foundation, joined by many others including the Emmett Till Legacy Foundation..

While more than a half-century has passed since this tragic murder, the crime continues to have an impact on many who grew up during the modern civil rights struggles. Mamie Till Mobley can take a good deal of the credit for this. She was a courageous and self-sacrificing woman who never quit speaking out on the tragedy of her son’s murder, and the fight against racist brutality. She was still living in Chicago when she died at the age of 81, one year before the Department of Justice finally tried to do something about her son’s murder.
***
About the author:
Susan Klopfer is a graduate of Hanover College and has worked as an acquisitions and development editor for Prentice Hall. She has won journalism awards from the Missouri Press and Missouri Managing Editors Associations. Her book Abort! Retry! Fail! was named an alternate selection for the Book of the Month Club. She and her husband, Fred, lived on the grounds of Parchman Penitentiary where she completed the initial research for Who Killed Emmett Till? They now reside in Cuenca, Ecuador where they enjoy writing and traveling. Susan’s new book, ThePlan, is set for September release. It is a historical fiction thriller about the murders of two gay, black lawyers who knew too much about the assassinations of Dr. Martin Luther King, Jr., and President John F. Kennedy.
Connect with Susan Klopfer Online:
Website: http://ebooksfromsusan.com
Twitter: http:/www.twitter.com/sklopfer
Blog: http://emmett-till.blogspot.com