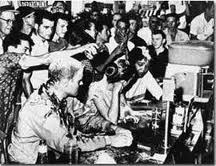 Dr. John Salter, Jr., Tougaloo College sociologist and civil rights leader, is harassed at a lunch counter in Jackson, Mississippi during an organized sit-in.
SINCE STARTING WORK on my new historical fiction novel on the Mississippi Delta and the modern civil rights movement (The Plan” A Novel), I have been sorting through old notes and papers I collected while living on the grounds of Parchman Penitentiary, and remembering at the same time so many of the brave people who championed civil rights. One of the people I have always admired is Dr. John Salter, Jr., also known as Hunter Gray or Hunter Bear.
Dr. Salter was a sociologist at Tougaloo College where he helped lead the Jackson Movement, working with the late Medgar Evers to try and bring sanity and hope to the students and others who were often beaten, brutalized and even killed for their participation in the movement.
Hunter and I keep in touch; our lives have had some intriguing parallels, since he once lived in Gallup, New Mexico (teaching on the Navajo reservation and helping to start Navajo College). We recently moved from Gallup to Cuenca, Ecuador; we just did not live there in the sames years — Hunter was in New Mexico in the late 1950s and early 1960s, as I recall. We also both lived in Iowa, again in different years — but he tells me that he often drove or took the train through the small town of Mount Pleasant where we lived before moving to Gallup. Life is so interesting, isn’t it? We have never met in person, but have enjoyed conversing by telephone and email, and I find interesting that somehow our paths have crossed, perhaps in another plane.
Anyway, I heard from this fascinating civil rights leader today that some people in Mississippi (civil wrongs leftovers) are spreading rumors that he is dying of Lupis, or that he at least is very ill and expected not to live. This is not so, he writes:
“Not much has changed in “official” Mississippi’s relationship to me since this good letter [was written] by John III [shown below, sk].  “They” seem very skittery when it comes to me — my name and certainly my mind and physical self.  I have defeated Lupus but hear recently, via solid sources, rumors from the Magnolia state that I am either dead, dying, or infirm.  I have never fit into the frameworks of caution and timidity — and I never will, We’ve now placed this on several of our website pages.  Hunter Bear, Fall, 2012.”
Here is the letter that Hunter refers to:
LETTER ON HUNTER [FROM JOHN SALTER III,  PUBLISHED  JULY 25 2005
MISSISSIPPI CLARION LEDGER]

Mississippi has been forsaking one of its champions.

In Jackson in the early 1960s, my father – John Salter – was known variously as an outside agitator, the “mustard man” at the Woolworth’s sit-in, friend and colleague of Medgar Evers, Tougaloo professor, target for police clubs (successful), target for Klan bullets (unsuccessful), organizer of the Jackson boycott, race traitor, firebrand, rabble-rouser, hero.

My father went on from Jackson to fight the good fight in North Carolina, Illinois, New York, Arizona, Iowa, Washington, North Dakota and elsewhere. Now it isn’t the Klan out to get him, but Systemic Lupus – a chronic, usually fatal disease.

My father is a warrior, but this is a tough one to win.  Some days his hands are rendered useless claws. But his soul and mind are strong and even in this state he’s doing what he can to leave the world in better shape than when he arrived.

I was with my father in 1979 when he spoke at a civil rights retrospective at Millsaps College. I was sitting in the audience next to Professor Jim Silver who, along with hundreds of others, gave my father a standing ovation.

A few years ago, my father changed his last name to Gray, the name his father was born with but held for only a short time before being adopted by the Salters. Mississippians will understand the importance of honoring one’s ancestry and, I hope, of paying tribute to those who helped make their history.

Learn much more about my father and his role in Mississippi by visiting his extensive website, www.hunterbear.org, or by reading his book, Jackson, Mississippi: An American Chronicle of Struggle and Schism.

(More notes from Dr. Salter –)
HUNTER GRAY [HUNTER BEAR/JOHN R SALTER JR] Mi’kmaq /St. Francis
Abenaki/St. Regis Mohawk
Member, National Writers Union AFL-CIO
www.hunterbear.org
(much social justice material)
Key pieces from our big Jackson Mississippi Movement
scrapbook.  Three consecutive and full pages beginning with
this Link:  http://hunterbear.org/a_piece_of__the_scrapbook.htm
See my personal reflections on Medgar Evers:
http://hunterbear.org/medgar_w.htm
The Stormy Adoption of an Indian Child [My Father]:
http://hunterbear.org/James%20and%20Salter%20and%20Dad.htm
(Expanded, and with more photos in Fall 2012. Material on our Native
background.)  And see Personal Background Narrative:
http://hunterbear.org/narrative.htm  (Updated into 2012)
For the new (11/2011) and expanded/updated
edition of my “Organizer’s Book,” JACKSON MISSISSIPPI —
with a new and substantial introduction by me.  We are now at
the 50th Anniversary of the massive Jackson Movement
of 1962-63:  http://hunterbear.org/jackson.htm