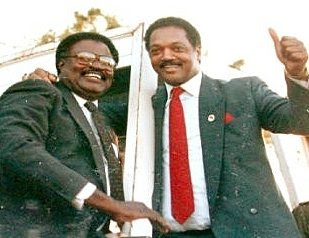 Cleve McDowell and the Rev. Jesse Jackson — cotton dust flies in the air.

Eleven years after the murder of a popular Mississippi lawyer, some still assert the murderers of Cleve McDowell were never caught. This criminal act deserves a cold case investigation — while it still is warm.

On the morning of March 13, 1997, the lifeless body of McDowell, first black student admitted to the University of Mississippi’s law school and a long-time civil rights advocate, was discovered by his youngest sister propped up against a bathroom wall.

Throughout his Drew, Miss. home, dozens of powerful handguns and rifles — “always one within his reach,” his sister and friends say — had been strategically placed by McDowell for self-protection. So why didn’t he use one to save his life?

What happened to bullets taken from McDowell’s body during the state’s autopsy? Would such evidence show if more than one shooter was involved? What happened to his guns and to all of his investigative files?

For over forty years, McDowell studied murders taking place during the modern civil rights movement. Where is all of the information he collected on the killings of Emmet Till, Medgar Evers and others?

There’ve been some attempts to explain what took place when McDowell was murdered, and one man went to jail. But nothing makes sense when you look at the whole story and talk to McDowell’s friends.

More on McDowell and others …