How history was made and how it’s being written

Aaron Henry, Mississippi Civil Rights leader from Clarksdale who made a difference
Recently I ran into an interesting article on the modern civil rights movement that brought important questions to light. The theme was based on a discussion of longtime social and civil rights activist, educator, and propagator of nonviolence Bernard Lafayette by Earl Lewis, president of the Andrew W. Mellon Foundation.
Lewis noted that Lafayette had “told me more than once that professional historians, while getting the main story correct, miss part of the essence of what occurred during the American civil rights movement.”
I agreed on the outset, but asked someone who was there, Dr. John Salter (Hunter Gray), a sociologist to comment on the article (which can be read in its entirely at
http://www.neh.gov/humanities/2013/special-issue/feature/civil-rights-and-the-changing-world)
First, a little more on Lewis’s article: He notes that to Dr. Lafayette, “…the story of the modern civil rights movement in the United States is about how the famous and the unknown systematically dismantled the edifice of segregation through dogged action and concerted strategy. He insists that while spontaneous actions may have prompted a few telling moments in the years after World War II, in most cases those who acted did so in a planned, orchestrated fashion. Even if every actor did not take part in the planning, the sit-ins, demonstrations, marches, and other engagements, the outcomes reflected long, quiet work before their more recognizable public displays.”
So what does Dr. Salter, a civil rights organizer, have to say? I asked him to review this article and share some brief thoughts. Here is what he had to say:
:
A few thoughts on Professor Earl Lewis’ essay:
This is, on the whole, a nicely done synthesis — blending evolving social history containing a substantive civil rights core — accompanied by a reasonably good bibliography in the endnotes.  The latter is strongly illustrative of the respective periods — and as a listing of worthwhile books.  On the whole, Professor Lewis makes a good case for the ever broadening scope of civil rights activism and awareness in various situational settings through the decades and their reflection by various historical and creative genre — especially in the last two generations.
I particularly appreciate Bernard Lafayette’s comments at the outset which note the importance of very careful  organization and development, coupled with careful strategic planning, leading to public demonstrations of various kinds. As a life-long organizer, I have always seen that as conceptually eternal, timeless — and Genesis.  Ella Baker and Fannie Lou Hamer are welcome examples  of two of many fine persons whose social justice horizons consistently broadened, as they continued their good works, into an awareness of the need for systemic changes.
Speaking personally, I have always been partial to biographical and autobiographical accounts of “movers and shakers” and detailed works focused on local struggles.
I have only a couple of mildly critical thoughts.  There are always especially significant books that could have been listed but were not. And the essay as a whole, necessarily complex, would benefit from subtitles clearly marking the transitions into successive epochs.  But these should not be construed as detracting from the overall sound caliber of this piece.
John R. Salter, Jr. (Hunter Gray)
***
Here is a link to Dr. Salter’s fascinating boo on the topic of civil rights organization: 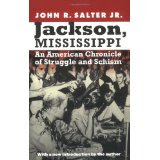 http://www.amazon.com/Jackson-Mississippi-American-Chronicle-Struggle/dp/0803238088/ref=sr_1_5?ie=UTF8&qid=1368762865&sr=8-5&keywords=John+Salter
A quick summary:
This is the gripping story of the civil rights movement in Jackson, Mississippi, told by one of its foremost activists, John R. Salter Jr. In 1961 Salter, then a teacher at Tougaloo Southern Christian College, the private and almost entirely African American school just north of the state capital, became the adult advisor of the North Jackson NAACP Youth Council, a post that for lifelong activist Salter blossomed into impassioned involvement in the Jackson movement.
The struggle for civil rights featured some of the bloodiest resistance by a panoply of repressive resources—“lawmen,” hoodlums, politicians, and vigilantes—but also introduced Salter to the movement’s most compelling and important figures, including NAACP field secretary Medgar Evers. Jackson, Mississippi tells the riveting story of their campaigns to abolish Jim Crow, including a committed and courageous economic boycott of Jackson that was instrumental in the desegregation of the capital’s business district. A fierce and passionate retelling of frontline stories from a cultural revolution, Jackson, Mississippi is a vivid snapshot of the Deep South in the 1960s and a testament to the brilliant, dangerous, and historic actions of the civil rights activists there.
And your thoughts? Please leave a comment. Thanks, Susan