Trailblazing reporter Simeon Booker, an award-winning black journalist whose coverage of the Mississippi murder of Emmett Till in 1955 is credited with galvanizing the civil rights movement, receives an honorary Doctor of Letters degree on Sunday, Dec. 15, at the Fall Commencement ceremonies of Youngstown State University in Youngstown, Ohio. 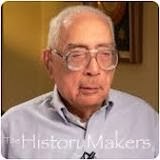 “We are honored to have Mr. Booker return to Youngstown and Youngstown State and to be recognized for the important role he played on the front lines of the civil rights movement in this country,” YSU President Randy J. Dunn said.
Booker, who moved to Youngstown at the age of seven, enrolled in Youngstown College (later renamed Youngstown State University) in 1938, but withdrew after learning that black students at the school were not allowed activity cards. As part of his visit to Youngstown, Booker will be presented with a symbolic YSU activity card at a community dinner and reception Saturday, Dec. 14, on campus.
Booker, long considered the “dean” of black journalists, was the first black staff reporter at The Washington Post and worked for more than 50 years as Washington bureau chief and White House correspondent for Jet andEbony magazines. He covered murders, marches, sit-ins and freedom rides and twice followed black troops to Vietnam. He is the recipient of the Newspaper Guild Award, a Willkie Award and the Nieman Fellowship in Journalism at Harvard University. This past January, Booker was inducted into the Hall of Fame of the National Association of Black Journalists. His book, Shocking the Conscience, was published this year by University Press of Mississippi.
Youngstown State University is a comprehensive urban research university that offers nearly 13,500 students more than 135 undergraduate and graduate programs backed by a strong tradition of teaching, scholarship and public service. Located on a 145-acre campus in the heart of the Tech Belt between Cleveland and Pittsburgh, YSU is known for its focus on academic research and creative programs that transform its students into successful professionals, scholars and leaders. For more information, visit www.ysu.edu.