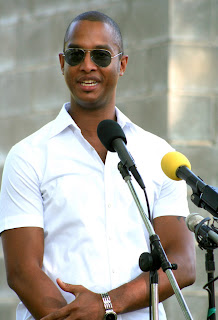 Keith Beauchamp speaks to an audience in Philadelphia, Miss., about the 1964 murders of Michael Schwerner, Paul Goodman and James Chaney. Only one man, Edgar Ray “Preacher” Killen, of potentially dozens of suspects, was ever convicted for the crimes.

Kelly Peters, reporter for the Daily Orange, writes that when Keith Beauchamp saw the photograph of Emmett Till’s brutally beaten face, run ran on the cover of a 1964 Jet Magazine, he became a civil rights activist.

“Till, a black boy from Chicago, Ill., was murdered in Mississippi in 1955. His mother insisted on an open casket to show the world the brutality in his death.

“Today, Beauchamp is still an activist, but Till’s murder has yet to be solved. Beauchamp said he is committing his energy to solving Till’s and other murders of the time.”